Just saw this wonderful photo on the Lost Edinburgh page on Facebook and thought I'd share it here. I'd never heard of Bathgate Park before, though it'll probably be familiar to a few here:
https://www.facebook.com/lostedinburgh/ ... 403136610/

Thanks for posting the photograph. Like you this was new to me. I have had a look at some history sites and some maps. Bathgate Park was situated off the Canongate and was bordered by New Street. The 1896 Ordnance Survey map shows this as a gas works. However, the gas works closed around 1900. After the closure the site lay derelict for a short time before being claimed as a football park - Bathgate Park – but in 1926/27 it became the New Street Bus Depot.

Bathgate Park was a cinder pitch and the home of Junior team Edinburgh Emmet but was also heavily used for other matches, e.g. juvenile, local cup finals, etc. It was also used for band concerts and other sports and in something I read was described as “the lung of the Canongate”.

The Edinburgh Corporation sold a 3.49 acre site that included Bathgate Park to the Scottish Motor Transport Company for £17,500. The Edinburgh Evening News reported “Apart from Tynecastle and Easter Road enclosures, has attracted than any other Association football ground in the city”. I have seen a note of a crowd of 7,000 at one game. The last report of football being played there is in August 1926. The Corporation found Emmet another temporary ground on land they were building on at Prestonfield in the south of the city. Emmet officials, while pleased they had a ground, were concerned with being decanted so far from the centre of the city. The temporary ground was very soon taken up for housing and the club moved to Meadowbank. The club ceased to exist in 1930.

Unless the work has progressed at the Canongate development - you can get a good idea of what the park looked like right now, as the site of the bus garage was cleared a few years ago. At the top of the pictures is the back of the Royal Mile, to the right New Street with the Council HQ behind (built on part of Waverley Station car park).

Photographers were I presume on Regent's Road up on Calton Hill - used by those wanting to watch without paying, and hence dubbed "the Jew's gallery", IIRC...!!
Top

Here is an aerial shot. 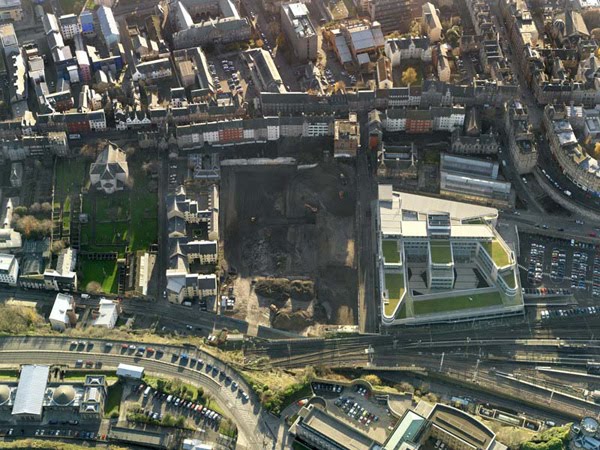 To the immediate south (top of the picture) is the Royal Mile and Moray House beyond. To the immediate west (right) is New Street, the council hq and Waverley Station beyond. To the immediate north (bottom) is the East Coast Main Line, then the steep ascent to Calton Hill with St Andrew's House - the government offices - and the old Royal High School with cars parked snaked in front. To the east (left) beyond the old buildings is the historic Canonage Kirk and churchyard.

Had it somehow survived into modern times Bathgate Park would have had one of the most spectacular settings in world football: not many grounds in the midst of a World Heritage Site!!
Top

Bathgate Park took its name from the City Councillor who first arranged for the derelict gasworks site to be turned over to Junior side Edinburgh Emmet to build themselves a park, which was little more than a cinder pitch with a perimeter fence - Baillie Bathgate. At one end of the ground a track/pathway led from Calton Road up to Regent Road & spectators would sometimes stand there to avoid paying to get in to watch games - in those less politically correct days of the 1920's it was known locally as the "Jew's Gallery".

Edinburgh Emmet are thought to have taken their name from Robert Emmet, described as an "Irish patriot", who is buried in the Canongate graveyard.

My research interest is Leith Athletic & as well as playing a couple of friendlies there in the 1920's against Edinburgh Emmet they also played a League fixture there on 2 January 1923 in the Eastern League against Aberdeen 'A', winning 2-1. Leith were homeless that season & played League fixtures at a number of other grounds including Easter Road, Chancelot Park & Wardie Road.
Top

In their last season, 1929-30, they finished mid table but they lost the final of the Thornton Shield to Musselburgh Bruntonians.

During the period of existence Portobello Thistle were also Junior, playing out of (I think) Woods Park? they folded at the end of 1933-34 season.
Edina popped up in 1932-33 and lasted till 1936-37, they played in yellow and blue.
Leith Renton appeared in 1934-35, changed their name to Portobello Renton two seasons later and lasted till the outbreak of WWII.
Top

East Fife's all-time top goalscorer Phil Weir signed from Edinburgh Emmet in 1922 together with Peter Barrett. Another player, Bobby Russell signed the same day (15th May) but I've never managed to confirm if he was also with Emmet, similarly Edinburgh-born Dave Edgar who moved to Bayview earler in the year.
All four were part of the side that reached the Scottish Cup final while still in the Second Division in 1927...
Top

Re Wood's Park in Portobello mentioned above. The park was part of the Wood's Bottle Works in Portobello which later became part of United Glass. United Glass had a Social Club which I've seen described as the entrance to the park. The football park was bordered by Baileyfield Road & Rosefield Place - adjacent to Rosefield Park (which is still there today). The footprint of land on which Wood's Park stood is now a warehouse building for Standard Life just off Sir Harry Lauder Road. When Leith Athletic started a reserve side up again after WW2 (season 1946/47) they played some of their home games at Wood's Park.
Top

I was on an 'early' shift on the morning of Dec 9th 1980. Getting together my ticket machine and my conductor's 'box'.

Somebody came in and said 'John Lennon has been shot!', thinking it was a 'joke' I replied 'They should have shot Paul'.

Then the realisation that it was true. Everybody was stunned. In those pre smart phone, internet, 24 hour news channels the first a lot of people heard the news was when they got on the bus. There was a collective grief that morning on the number 70 from Woodside Drive to Edinburgh.
Jackson; James; Jackson; James; Jackson
Top
Post Reply
11 posts • Page 1 of 1