I hope someone can help here with what's a fairly vague question I'm afraid. I recall that there was a TV series, aired one episode a week I think, in the run-up to one of the World Cups (82? 86?), about the history of the game in Scotland. I don't remember details now from it, except that Bob Crampsey was one of the contributors and that it seemed a bit more intelligent than the norm. The sketchiness of this makes it difficult for me to Search, so I'm hoping someone will know what I'm on about and maybe where I migth be able to get a hold of it. Thanks for any help.
Top

This was "Only A Game?" broadcast in five parts in 1986 by the BBC and narrated by William McIlvanney. I don't know if there is an official DVD version available but I understand pirate copies can be found on the web.
Top

I watched this first time round, but haven't been able to get a copy, or see it on TV or elsewhere since, which is a great shame.
Top

Only a Game was of course the object of the very first Only an Excuse parody, which was quite funny:

<hughmcilvanney>The game of football in Scotland was first played at Bannockburn in 1314 when two teams of Scottish soldiers booted the severed head of an English knight around the bloodied battlefield. It was a dour encounter with little in the way of genuine goalscoring opportunity, or so reported Doug Baillie of the Sunday Post who was present at the time...</hughmcilvanney>
Fraser
Top

Every Only a Game? episode can be accessed via

It gives links to youtube, and each part is broken down into 10 minutes chunks.

You can download it to your HD by a youtube downloader and burn it to a disc for offline viewing.

Piracy maybe, I don't think the BBC hasn't repeated this, or made it available via video or DVD, so if this is the only way to see this superb series again...
http://scottish-football-historical-archive.co.nf
Top

Was this not the series where Souness said he would be interested in the Rangers job, and he became Rangers manager soon afterwards?
It's the Hope I can't stand
Top

bobby s wrote:Was this not the series where Souness said he would be interested in the Rangers job, and he became Rangers manager soon afterwards?

My memory may be letting me down but I thought when Souness was announced as Rangers (player) manager it was a total shock to all assembled when he entered the room.
Top

scottish wrote:My memory may be letting me down but I thought when Souness was announced as Rangers (player) manager it was a total shock to all assembled when he entered the room.

Ahem, may I refer the Honourable gentleman to the following moment in the show:
http://www.youtube.com/watch?feature=pl ... jyPLo#t=68

No more than an idle fantasy at the time I suppose, or did that slightly embarrassed laugh disguise a greater certainty?
Fraser
Top

Must have forgotten that clip but it was certainly a great surprise when he was appointed. Not even the best placed succulent lamb merchants had a scooby. September 1985? In one sense it was only eight months away but a lot can happen. If Rangers had been successful under Jock Wallace that season, would they have changed manager?

But what about the next bit. Who is this Jock STINE fellow? Mind you, in the commentator's defence I should say that my wife always wants to know why I say Franken STEEN.
Top

scottish wrote: Mind you, in the commentator's defence I should say that my wife always wants to know why I say Franken STEEN.

bobby s wrote:Was this not the series where Souness said he would be interested in the Rangers job, and he became Rangers manager soon afterwards?

I'm led to believe the magnificent thatcher had already been sounded out. 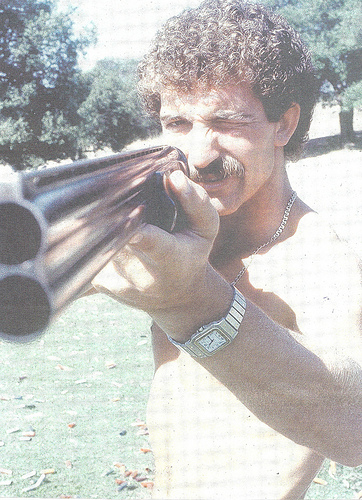 I loved Jock Wallace but the oldco needed an electric shock and that's what it got. IIRC, from David Mason's 'The Managers', he suggested there had been a block on any significant spending for the last 18 months of Wallace's reign. Wallace subsequently claimed he had wanted Craig Levein, Gordon Durie and John Brown but had been refused which does back this up. Two of them, of course, would eventually make it there in happier times. The appointment of Souness, then, was not thought up over a week or so. David Holmes had been given the brief to make the oldco attractive to buyers and that's what he did. The fact that said buyer was a procreative act shameless crook, just like his faither, is just one of life's unfortunate events.
Top

All managers get "sounded out" beforehand. I wouldn't suggest things happened overnight but if you look at press reports of the time it came as a bolt from the blue. No speculation whatsoever. Given too that Souness was playing in Serie A, had a year still to run on his contract and had never played in Scottish football, it was an appointment which was totally unexpected.
Top

The signing of Mo Johnston was a similar bombshell to the media despite being nearly two months in planning. It seemed to be possible before Facebook, Twitter and the ubiquitous camera phones to keep something under wraps. I believe Souness wasn't speaking entirely innocently in 1985. I certainly don't believe David Holmes story that he only went for Souness after the 4-4 draw with Celtic on March 22, 1986 and his disgust at Jock Wallace's reaction at the draw. Wallace had seemingly came up the stairs after the game singing the Sash (as if) whilst Holmes was furious at dropping a point against 10 men. Complete nonsense, I suspect, as there is no way Holmes was able to persuade Souness, the bank, the board and Sampdoria all in the space of two weeks. Then again, it is said he was a joiner from Falkirk who thought he was a carpenter from Nazareth.
Top

lbb wrote: Then again, it is said he was a joiner from Falkirk who thought he was a carpenter from Nazareth.