I've been given the attached picture and asked if I know any more about the team in it. However, to be quite frank, I don't.

The person who gave it to me says that he thinks it's Queen's Park and that the goalkeeper is called Clarkson (or similar) and is from around 1900.

However, the only Clarkson (A.H. Clarkson) who has played for our 1st XI was an outfield player. The "Men With The Educated Feet" has a team pic from 1899/00 which lists a J. Clarkson, however the players are in suits and J. Clarkson looks nothing like the goalkeeper in the picture.

Also, is that Second Hampden in the background? Tried googling pictures of Cathkin Park but virtually all pics relate to the 50's and 60's and the only pic I can see from QP's time there is of the pavillion which looks nothing like the one in the picture. Also I can't see any players in the pic who look like players in the first team squads from that era.

If anyone can shed any light I'd be very grateful.

No idea about which club it is but it certainly isn't from 1900. Looks more like the late 20s, early 30s to me.
I see what appear to be lights around the perimeter which suggests it's at one of the grounds which staged greyhound racing. Not Cathkin nor Lesser Hampden. Shawfield possibly?
Top

Alan McCabe wrote:No idea about which club it is but it certainly isn't from 1900. Looks more like the late 20s, early 30s to me.
I see what appear to be lights around the perimeter which suggests it's at one of the grounds which staged greyhound racing. Not Cathkin nor Lesser Hampden. Shawfield possibly?

I agree that it looks like a greyhound track with the lights and the judge's box (or whatever they used it for!) high up overlooking the track. Also the amount of spectator cover was probably more than a football-only ground.I did check about Powerdhall in Edinburgh but that box was over what would have been the half way line.
Top

Thanks for the replies.

Took it into the Football Museum yesterday, immediate reaction was that it wasn't Shawfield in the background. One of the staff thought it might be Ashfield, but although the stand at the left of the picture looks similar to old pics of Ashfield's ground, we couldn't see any pics of a similar pavillion/judges box in an Ashfield history book.

A couple of other suggestions were that it may be a QP veteran's team (which I didn't realise were quite popular back in the day) or possibly a junior team, Glencairn was one name suggested.
Top

Also noticed that the players are wearing an assortment of socks.
Could be a representative team possibly, where the club socks of the player's actual club are worn? Alternatively, such lack of uniformity to suggest an amateur, junior or works team perhaps?
Still not sure about the ground but have a hunch this could be an English venue.
Top

Like Alan, my first thought was that it was long after 1900.

This looks like Darlington FC taken at Feethams.
Top

Certainly tallies with Darlington's strip from the 20s, which is when this must have been taken judging by the plus fours and brylcreem. And the stand and elevated box also tally with Feethams, from what I can find on the web - hard to find any pictures of the ground from that period, or team photos with which to compare faces.

Even at the end of its days Feethams featured that elevated box but I can't find an old picture which shows the one seen here. This is from before its closure in 2002: 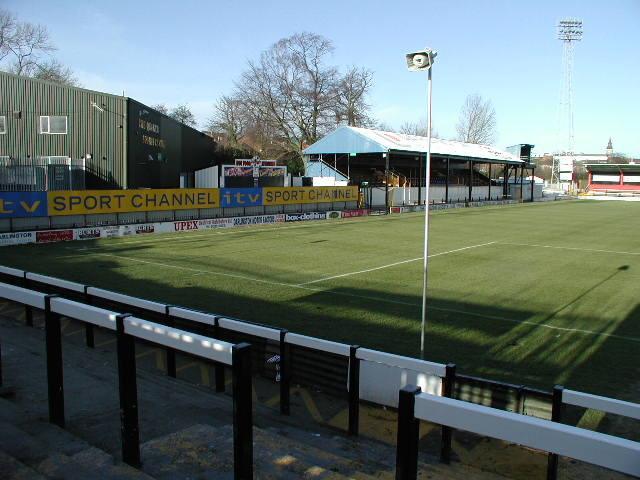 However, looking at an aerial view of Feethams taken in 1949 on Britain from Above, there's no building or box at that end of the shed, nor any roof on the end terrace: http://www.britainfromabove.org.uk/image/eaw027392
Fraser
Top

From the limited photos available, I'm not convinced it's Feethams.
Despite being adjacent to the cricket ground, the football venue appears to have been quite small and cramped by comparison. What few pictures I've seen appear to indicate a traditional rectangular ground with no evident space for a greyhound track.
Looking at pictures of old grounds, Powderhall, White City, the Albion Ground and Gretna all have stands and terracing that could tie in although the angles that the photographs were taken from make it difficult to work out. I'm drawn to Powderhall though.
Top

I have now looked at some older pictures of Powderhall in Edinburgh and I agree that it is now a strong possibility for the scene of the mystery photograph. My earlier comments were based on photographs towards the end of the stadium's life. However "Britain from Above" has two photographs from 14 December 1937 that show the stadium set out for football. There is a judge's box with another building at the end of the main grandstand that itself extends to the end of the straight or the football pitch and so is situated almost level with the goal line. There is spectator cover around the curve of the track and behind the goals. If it is Powderhall then the players in the mystery photograph have one of the corners of the football pitch or the start of the curve of the dog track behind them with the main stand to the left as we look and the cover around the curve to the right.

Logging in to "Britain from Above" you can zoom in and see the football marking and the dog track equipment. It is image SPW056049
Top

Looking at that picture on Britain from above, if you zoom in, the roof on the structure to the right of the original picture, it looks as though it has a slight curve on it, as does the original pic. There is also a section of fencing which sticks out about ten yards to the side of the structure which can also be seen on the original picture. The pavillion/judges box also looks the same, with a small box at roof height built in front of the structure. Also, if you look to the right of the gentleman in plus fours, there is a small narrow window-like gap at the back of the stand, again you can see a similar gap on the Britain from above picture.

Thanks to everyone who took time to reply/look at the pic.
Top

I would agree with Powderhall, and in fact there is a team photo of Edinburgh City standing in front of the same building. It was taken before their opening league match in August 1931 and is published in the club history as well as Dave Twydell's Rejected FC.

However, I can't match the faces in this pic with those of the Edinburgh City players (or in any later team photos), so it might be a different team.
Top

St Bernards? They played in hoops at this time. I'm sceptical even of my own suggestion however since orthochromatic film of that era would render even darker blues as very light, so the kit would not look like this.
Fraser
Top

A few more thoughts to throw into the pot!

The team and officials all look quite young. Where is the trainer? Normally you would see an older guy in his waistcoat, sleeves rolled up to his elbows and a towel over his shoulder. The chap in the plus fours is remarkably smart and the other official has what looks like that morning’s paper under his arm.

Someone has already pointed out the assortment of socks.

There is something telling me that this does not look like a “normal” football team or even a “select” team. I cannot explain it but it looks more like a rugby team! I have read that the Edinburgh University charity week sometimes featured a game of Association football with the two teams drawn from association and rugby union players. I seem to remember one such game was played at Tynecastle. I had a quick look on the British Newspaper Archive – where I think I saw the original article – but nothing came up from a quick search.
Top

bluedragon wrote:The chap in the plus fours is remarkably smart and the other official has what looks like that morning’s paper under his arm.

Definitely not St Bernard's, by the way. Their hoops were much broader.

Powderhall was used for all sorts of minor cup finals as well as league matches, which broadens the scope.
Top
Post Reply
17 posts