The place to recommend books to other Forum users. Or even to warn off.
Post Reply
12 posts • Page 1 of 1

I'm currently writing a book with the above title which will be available later this year. Below is the press release sent out by the club this week.

From 'Bummer' to 'Boomer'

The greatest names in the history of Kilmarnock FC are to be celebrated in a new book. ‘Killie Greats’ will feature ten of the most famous players to have worn the blue-and-white since the club’s foundation in 1869. Star players from every era of Kilmarnock’s history will appear in the book:

Jamie Mitchell – first player to make over 400 appearances for the club.

Mattha’ Smith – grandfather of former player and media pundit Gordon Smith, he is the only player to win the Scottish Cup twice while with Kilmarnock.

Frank Beattie – who captained Killie to the league championship in 1965.

‘Killie Greats’ will be written by football historian David Ross who runs the scottishleague.net website. David – himself a Kilmarnock supporter – is the author of several football books, including the official centenary history of Hampden Park (with Forrest Robertson) and two previous Killie club histories. His most recent book was the critically acclaimed ‘ROAR Of The Crowd.’

Retailing at just £9-99 and illustrated throughout, ‘Killie Greats’ – available from October - is sure to be welcomed by Kilmarnock fans everywhere and Scottish football fans in general. Fans who place an advance order can have their names printed in the book. Details from Alan Johnston on 01563 545318.
Top

Killie Greats? Gonna be a pretty slim volume then?
Fifty one and counting
Top

This book can now be ordered in advance from the club. It's unlikely it will be on sale elsewhere. If you order now you can add your name to the list of advanced subscribers which will be printed in the book.

The contact details at the moment only has a UK phone number. I will be speaking to the club before the Rangers game this weekend to see if they can post details for overseas purchasers.
Top

There is now an-email address at the link above and a form which can be downloaded, filled in and e-mailed back for non-UK purchasers to add their details.

Anyone who wants to post their details back to the club can do so via Freepost.
Top 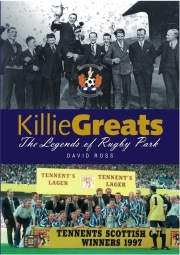 This book will be launched officially on Thursday but is available to buy now.
Top 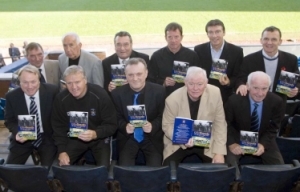 Hello David, Managed to get my copy of your book after the Killie vs. Dunfermline game on Saturday and got it signed by Eric Murray, Andy King, David Sneddon and Eddie Morrison. Another excellent addition to the history of the club. I didn't envy your task on restricting it to 10!!
Top

Thanks. A list of ten players is always going to be controversial. I've tried to explain the thinking behind my selections in the introduction to the book. There's always the possibility of a second (and subsequent) volume if this one sells well.

I was going to go up for the Dunfermline match and sign some myself but couldn't make it. Instead, I'll be there this Saturday for the St Mirren match. So, having missed a 5-1 win, I now expect a 0-0 draw!

Anyway, if you want my messy scrawl added to the illustrious names already there I'll be signing books in the Park Hotel both before and after the match.
Top

Good picture of the aging HOLE IN THE WALL GANG or is it Block D of the BarL on their day release holding their registration numbers against their chests? Do not approach these men. Do not "have a go".
Top

Just realised there's eleven in the pic. Makings of a decent team there. King, Robertson, Monty & Beattie in defence, JJ, Murray, & Sneddon in the middle with Smith & Morrison up front. Add a creative right-sided midfielder who can land a fifty-yard diagonal pass on a threepenny-bit (must be one in there somewhere

) and the Chairman can go in goal.
Top