The place to recommend books to other Forum users. Or even to warn off.
Post Reply
8 posts • Page 1 of 1

'Very Heaven' can now be ordered in advance. Signed copies are available for just £9-50 (including 1st class UK postage) - a discount of £2-45 on the RRP. Details HERE 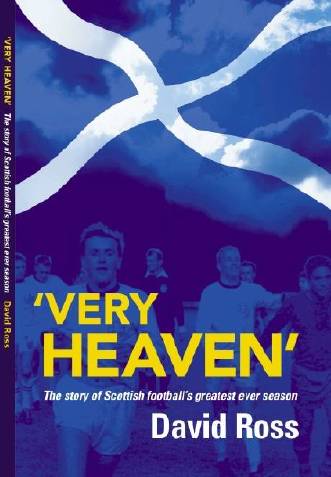 It was a football season like no other, before or since. In 1966-67 Scottish football was the best in Europe, if not the world. The Scotland national team humbled world champions England and on their own Wembley turf too. Celtic became the first British side to win club football's most glittering prize, the European Cup. Rangers kept pace with their ancient rivals all the way to a European final of their own. Kilmarnock and Dunfermline performed with distinction in Europe as well and Dundee United, in their first ever European tie, humbled mighty Barcelona both home and away.

In the domestic game a tense title battle, keen contests for European places, relegation dogfights and battles for promotion kept interest alive until the last ball was kicked. The Scottish Cup witnessed the greatest upset of all time when little Berwick Rangers knocked out their Glasgow namesakes. Then at the end of this momentous season, one of Scottish football's oldest names, Third Lanark, vanished after 95 years.

For the first time the story of this thrilling season is told in print. Re-live the days when Scottish football bestrode the world, when to be a football fan and Scottish was...

I'll bump your book up to the top of the pile for Christmas and I'll do it again if you tell me you've spotted your howler of an error for Rangers.
Fifty one and counting
Top

Gersman wrote:I'll bump your book up to the top of the pile for Christmas and I'll do it again if you tell me you've spotted your howler of an error for Rangers.

Probably much too late to affect xmas sales but thanks anyway. Rangers howler? Did I say something about their stylish and attractive football winning the hearts and minds of people all over Europe? Or their supporters being garlanded with praise for their friendliness on their travels and the widespread appreciation of their repertoire?

Failing that it has to be page 119 where the words 'Bucharest' and 'Steaua' should be replaced by 'Zabrze' and 'Gornik.' Rangers beat Steaua Bucharest in the 1969-70 ECWC before losing to Gornik Zabrze. I got it the wrong way round and I stand corrected.
Top

Was going to tell you about that one! I enjoyed the book very much and would recommend it to anyone who wants to read about a time when we Scots actually expected to win things - and occasionally, actually did.

You said in the book that the Vojvodina players were protesting after the final whistle of the Celtic match when McNeill scored in the last minute. Andy Dougan's recent book reveals why - Steve Chalmers obstructed the Vojvodina keeper and prevented him getting to McNeill's header....

Also - in the Rangers 2nd leg match against Zaragoza, Zaragoza had 2 goals disallowed (according to Brian Glanville). Bayern also, I believe, missed a penalty against Rangers in the final - not sure who took it - Muller?

Interesting to read English journalists and football historians on the Celtic team of 1967 - the consensus seems to be that Celtic were 90% effort and 10% skill, and were lucky. Well they did get a couple of pieces of luck (in particular in facing an Inter team who gave possibly the worst performance ever seen in a European Cup final) but you do need luck to win trophies. Like having a short-sighted Soviet linesman.....

And on the England 2 Scotland 3 result - this is blamed entirely on injuries to English players - a contemporary newspaper report commented that Scotland had managed to beat 8 fit men.
Top

Thanks for that - much appreciated. I'm not doubting the veracity of what you say regarding the Vojvodina protest, Zaragoza disallowed efforts or any penalty in the final but I will point out that none of these events featured in the match reports I read while researching the book - and I've just re-read them to double-check. The ECWC final was televised live but my memory doesn't stretch to recalling any penalties.
Top

Have done some double checking.

The disallowed goals were mentioned in "World Soccer A to Z" (ed Norman Barrett) whose Scottish contributor was Fraser Elder - who I can remember doing match reports for Sportscene on Saturdays. Apparently Beckenbauer missed a penalty against Rangers, the source for this is Brian Glanville's Sunday Times football annual which is usually fairly reliable. Andy Dougan quotes both match reports and an interview he did with Chalmers for the Vojvodina incident.
Top

'Very Heaven' is now available as an E-BOOK

The price is £3-75. It can also be purchased in Euros or US Dollars. The sterling price will stay the same but Euro and USD purchases may be subject to exchange rate fluctuations. At the time of writing e-book costs are €4-30 & $5-89 respectively.

The e-book version is a .pdf which should be compatible with Amazon Kindle, Sony Reader and other e-readers as well as any computer.

Of course it is still available as a paperback.

Price not including p&p
Top